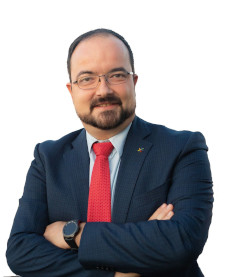 Theme: “Digital Transformation as a Path to the Education of the 21st Century”

Nikola Božić is the Program Director at Petnica Science Center, an independent organization for extracurricular science education. He is a science educator and science communicator, and TEDx speaker. Nikola was editor-in-chief of Popular Science Magazine (Serbian Edition) and editor of the scientific column at B92.net. Nikola Božić was the author of the popular science book “Astronomy” that received the national prize “Neven” for the best popular science book for youngsters in 2013. He was awarded for his extraordinary contribution to promotion of science by Serbian Ministry of Science with the “Milutin Milankovic” prize in 2010. Nikola Božić is the president of the Board of Young Researchers of Serbia. He is coordinator of the Working Group 18 of the National Convention for EU Integrations for Chapters 25 and 26 (education and science) which is organization established to monitor the EU integration process; and the member of The EU-Serbia Civil Society Joint Consultative Committee (JCC) which is one of the bodies set up within the framework of the Stabilisation and Association Agreement between the European Union and Serbia. Nikola Božić was decorated by French Republic with the medal as the knight in the Order of Academic Palms for his activities in scientific and educational cooperation between Serbia and France.